I’m excited to announce that Digital Thoreau has embarked on a new project, funded by an Innovative Instruction Technology Grant from the State University of New York, to produce a fresh encoding of HM 924, the manuscript of Walden.

The grant has made it possible for the Huntington Library to digitize the manuscript and host the manuscript images in its Digital Library, where they can be freely accessed by the public.

Whether using these modules as part of a class or on their own, learners will have the opportunity to develop and hone their documentary editing skills by contributing to a brand-new encoding of the manuscript. Using an interactive transcription interface, they’ll be able to view the manuscript images and identify a variety of manuscript features (such as Thoreau’s insertions and cancellations) either through a suite of editing tools or by directly entering XML-TEI.

This new manuscript encoding will serve as an invaluable companion to Digital Thoreau’s current fluid-text edition of Walden, based on a collation of witnesses across the manuscript’s seven draft versions undertaken by Ronald E. Clapper for his 1967 PhD dissertation, The Development of Walden: A Genetic Text. In the intervening years, there has been no comparable effort to chart the evolution of Thoreau’s masterpiece by examining his extensive rewriting and redeployment of passages as the manuscript grew between 1846 and its publication in 1854. We expect that the Huntington’s high-resolution scan of the manuscript will yield numerous new insights and permit the correction of various errors.

The team collaborating on the SUNY grant-funded project, A Laboratory-Based Introduction to Digital Scholarly Editing, includes the following scholars:

Mark Gallagher, doctoral candidate in English at UCLA, Research and Instructional Technology Consultant at the UCLA Center for Digital Humanities, and editor of the Thoreau Society Bulletin collaborated with Tom Hersey, who teaches writing at the University of Massachusetts, Lowell, to produce this 3D photogrammetric reconstruction of Walton Ricketson’s 1898 bust of Thoreau, based on the original at the Thoreau Institute Library of the Walden Woods Project.

If the model doesn’t show up for you below, you can go to it directly on Sketchfab here. Click the “play” button, zoom to fullscreen, and rotate the image for a full experience of Ricketson’s sculpture — or as full an experience as you’ll get without a trip to the Thoreau Institute Library itself (recommended).

If you have a VR headset or Google’s cardboard VR viewer, you can also see the bust in virtual reality.

The text is “Walking,” one of Thoreau’s most popular essays, published in 1862.

As our “Note on the Text” explains,

On April 23, 1851, Thoreau “tried out a new lecture, entitled ‘The Wild,’ on the Concord Lyceum and on May 31 repeated it in Worcester. It was to become one of his favorite lectures, one that he repeated many times, working it over and adding to it each time until eventually it became large enough to break into two, the new part entitled “Walking.” Because he knew the market for it would vanish once it reached print, he was careful not to have either part published in his lifetime. But just before his death, he put the two back together again and sold the essay to the Atlantic Monthly where it was published in the issue of June 1862 . . .” (Walter Harding, The Days of Henry Thoreau, Princeton: Princeton University Press, 1962: 286).

Start reading “Walking” now or register an account on the main site and join the public group “General Discussion” to start a conversation in the margin. 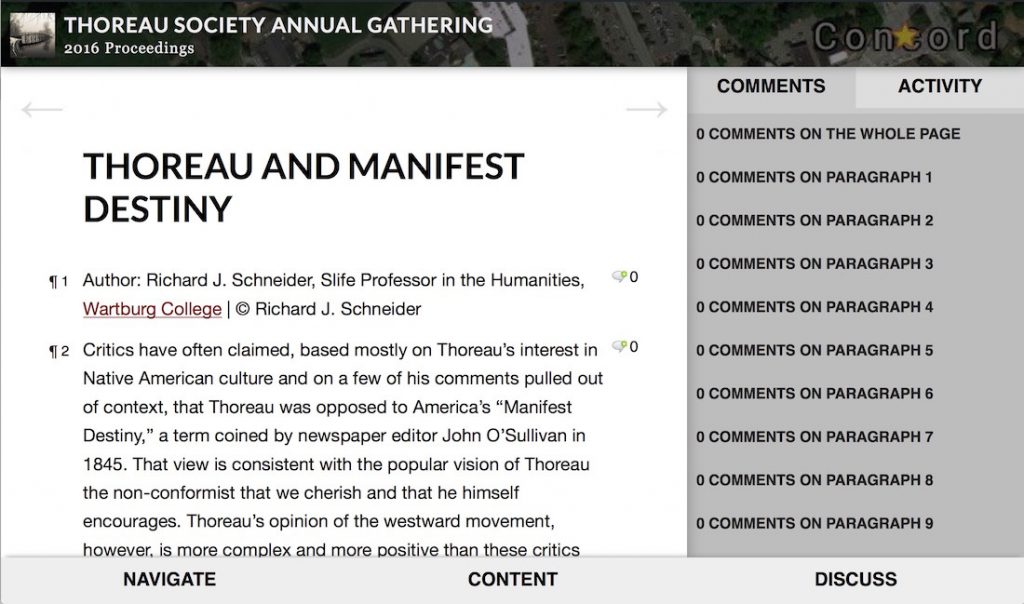 This spring, about two dozen students in two sections at Duke Kunshan University in Kunshan, China are taking “Walden International: Analyzing Thoreau Across Cultures” from Patrick Morgan, a Ph.D. candidate and Graduate Instructor in English at Duke University and a graduate of SUNY Geneseo (English, Geological Sciences, 2010).

Morgan’s Kunshan students are discussing Walden in the margins of Thoreau’s work at The Readers’ Thoreau, the online community of Digital Thoreau.

The students are also “analyzing [Thoreau’s] writings from an international perspective, focusing primarily on his engagement with Asian thought,” according to Morgan’s syllabus, asking how Thoreau “‘package[s]’ ancient Asian philosophies in order to comment on nineteenth-century American culture” and what “cultural forces and contexts … allow scholars like Lin Yutang to claim Thoreau as ‘the most Chinese of all American authors.'”

In addition to meeting with Morgan for 300 minutes each week in class and exchanging ideas online in the margins of Walden, the Kunshan University students are taking a digital field trip to Walden Pond thanks to a website Morgan has created that links passages of Thoreau’s text to YouTube videos he made in which he reads aloud from Walden while capturing the pond’s sights and sounds.

Morgan has been active in Thoreau studies since his undergraduate days at Geneseo, where he presented on “Thoreau’s Bedrock: Emerson’s Influence and the Geomorphological Significance of Emerson’s Cliff, Concord, Massachusetts” for Geneseo’s day celebrating undergraduate research, GREAT Day, in 2010. That same year, his article on “Aesthetic Inflections: Thoreau, Gender, and Geology” appeared in the Thoreau Society’s scholarly annual, The Concord Saunterer. In 2015, Morgan participated in an NEH summer institute for college instructors on “Transcendentalism and Reform in the Age of Emerson, Thoreau, and Fuller” conducted in Concord by a roster of scholars that included Sandra Harbert Petrulionis, Phyllis Cole, Jayne Gordon, Robert Gross, John Matteson, Wesley T. Mott, and former Geneseo Harding lecturers Laura Dassow Walls, Megan Marshall, and Joel Myerson.

In addition to his studies and teaching at Duke University, Morgan serves as an editorial assistant at the scholarly journal American Literature, published by Duke University Press.

Today, we’re thrilled to announce that two of our projects at Digital Thoreau — Walden: A Fluid Text Edition and The Readers’ Thoreau — are ready to use.

Walden: A Fluid Text Edition enables readers to track Henry David Thoreau’s revisions to Walden across the seven manuscript versions he composed between 1846 and 1854.

To create it, we’ve taken the critical apparatus of the manuscript versions first prepared by Ronald E. Clapper in his 1967 Ph.D. dissertation The Development of Walden: A Genetic Text and encoded it in TEI. When displayed in the Versioning Machine, open-source software first developed under the editorship of Susan Schreibman, our TEI makes it possible to compare any of the seven versions with any other or with the base text, the Princeton University Press edition of Walden. To produce our fluid-text Walden, we worked closely with Prof. Clapper; Elizabeth Witherell, editor-in-chief of Princeton’s The Works of Henry D. Thoreau; and Syd Bauman, XML Programmer-Analyst at Northeastern University Libraries. We gratefully acknowledge their assistance and the cooperation of Princeton University Press.

The Readers’ Thoreau embeds the published version of Walden in a social network, making it possible for readers to form groups to discuss Thoreau’s classic in the margins of the text and in discussion forums. Funded largely by a State University of New York Innovative Instruction Technology Grant, The Readers’ Thoreau is built entirely with open-source tools and has resulted in improvements to those tools that will benefit everyone who uses them. The social network is provided by Commons In A Box, a WordPress plugin developed at City University of New York, and the in-text social reading capability comes from another plugin, CommentPress. The current lead developer of CommentPress, Christian Wach, has written new code that tightens the integration between the two plugins and adds many new affordances to the CommentPress interface, including more granular visibility settings, the ability to “like” and feature comments,  and the ability to let selected users enrich their comments with media. Readers will be able to filter the comments that are visible to them so that they see only those they care about. In addition, all readers will be able to follow discussion among a “panel of experts” — readers whose knowledge of Thoreau gives their contributions to the discussion added interest and value. We’ve seeded these expert comments with the late Thoreau scholar Walter Harding’s annotations to his 1995 edition of Walden.

We have a third, ongoing project at Digital Thoreau: The Days of Walter Harding, Thoreau Scholar. The Days is an effort by undergraduate digital humanists at SUNY Geneseo to explore the life and work of a pre-eminent Thoreauvian who helped to found the Thoreau Society in 1941, produced numerous scholarly books and articles on his subject — including the influential biography The Days of Henry Thoreau (1965) — and taught at Geneseo from 1956 to 1982, where he achieved the ranks of SUNY Distinguished Professor and University Professor. Using the open-source archiving platform Omeka, Geneseo students are digitizing materials from Harding’s vast trove of Thoreauviana and organizing them into online exhibits.

We’re excited about all three of these projects. We hope you’ll visit them here and send us your feedback.

Promoting public engagement with Thoreau’s works is an important goal for Digital Thoreau. The internet has opened a world of possibilities for social reading: a way to share ideas about a text through comments linked to particular passages.

To explore how we might create the richest and most flexible social reading experience of Thoreau’s Walden, Digital Thoreau is bringing together academics and other professionals interested in social reading for THATCamp Western New York, which will be hosted by SUNY Geneseo February 18-19, 2013. THATCamp Western New York is generously funded by an Innovative Instruction Technology Grant from the State University of New York.

Code for America fellow Eddie Tejeda, the creator of Digress.it and the lead developer of Regulation Room, will be among the participants.

Okay – and a few seconds. We created this project pitch video for our page at DHCommons an initiative of centerNet. DHCommons matches digital humanities projects in need of assistance with scholars looking for projects to join.